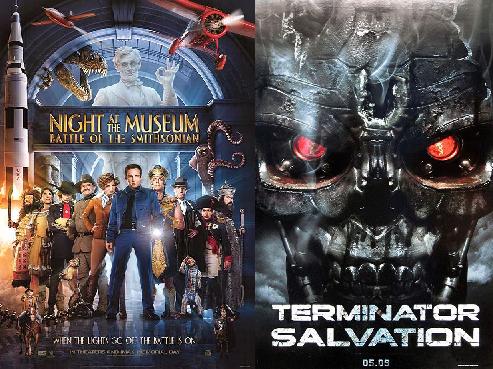 Night at the Museum – Salvation

So after a busy couple of weeks, I decided it was time to see a movie last night.  My list of summer must-sees was starting to pile up and I knew this weekend wouldn’t relieve that growing list at all.  So last night I decided to see Night at the Museum at the theater near my hotel.  I probably would have chosen a different one, but the fact that it was on their IMAX theater definitely intrigued me, and I thought the first one was pretty funny.  As expected, the flick had some great lines, funny anecdotes and characters, but generally was just a feel good family movie.  Amy Adams got headlines for her portrayal of Amelia Earhart, which was good, but I’d have to say Hank Azaria steals the show.  Azaria usually doesn’t get the credit he is due, but he is hilarious in this one.  I think the funniest moment is towards the end when he gets pissy with Ben Stiller about 1) talking, 2) reaching over to his side, and 3) not giving him the tablet.  Pretty funny stuff, overall I’d give it a 8.  My only complaint was that Jonah Hill needed a MUCH bigger part.  He should have been wrapped into the story after his cameo scene … it would have also led the way to a cool spin-off 3rd movie.

Then, because the IMAX cost $15 for a ticket and I felt the need to get my money’s worth, I “snuck” into Terminator Salvation.  The theater was tiny and I sat a little too close, but overall it wasn’t nearly as bad an experience as I expected.  Perhaps next time I should not listen to the world’s worst movie critic in Dan Rothstein and let the professionals input weigh in a bit more heavily.  EW pegged it for a good movie and a win for Hollywood, and although it wasn’t spectacular, it was definitely a good movie.  I love the twist at the end with the T-800 and you have to enjoy Christian Bale’s remake of the first movie’s classic quote.  Sam Worthington was a good supporting actor and the action more or less gave the movie enough credibility to the expectations.  Overall, I’d give it a 7, but it could be worse.