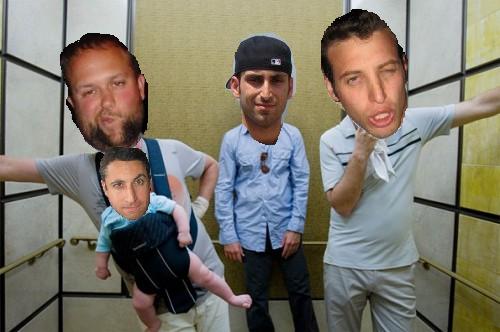 Did, umm… did Caesar live here?

Well, its that time of the year again.  Hello Neiman is off to Vegas, and who knows if I’ll return.  Maybe I’ll strike it big and move to Maui, maybe I’ll lose big and get buried in the desert … or maybe I’ll wake up in a Presidential Suite at Caesar’s Palace with a missing tooth, tiger in the bathroom and baby in the closet.  Hey, its Vegas … you never know.

Even though Alex just bought a car, I’m about to buy one, Fineman has a wedding to plan for, and Mikey V is … well, he’s a Vegas Virgin, I think it will be a trip for the ages.  I can already see the screenplay for The Hangover 2 in the making.  Of course, we all know who would be which character, but I felt it necessary to depict the group in an artistic rendition of the original cast.  Mikey V is the comedian (that isn’t allowed with 200 yards of a school … or Chuck E. Cheese), Sasha is the pretty boy sweet talker who steals money for children, and obviously I’m the straight shooter toothless wonder who thought he was going to Napa!  Oh, and Fineman?  Fineman is Doug.  We all know how he can play the disappearing act like no other, and well … he is the one getting married.  For the sake of the photo, though, I felt the baby needed a new head too.

What happens in Vegas, stays in Vegas!  … except for…