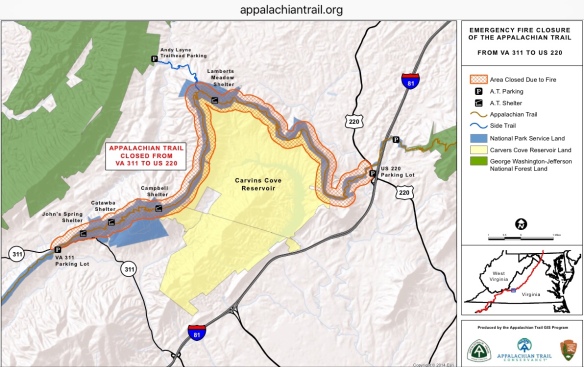 NOTE: Before I give today’s update – For anyone a few days behind me, there is a forest fire on the AT between Catawba and Daleville, including McAfee Knob. Firefighters are working to contain the fire, but the trail is closed between mile 709.4 and 729.2. All hikers have been safely evacuated from the area, and it looks like it may be a long time before it opens again. Stay safe and keep an eye on updates here for changes in status.

Day 61. Our hiker party from last night ended very early, and everyone was in bed by 6:30pm. It’s an odd feeling going to bed when it’s so early and bright out, but it does mean you get a good 12 hours of sleep.

And that I did. I woke up around 7am feeling extremely rested and ready to roll. I was the late riser as usual, as everyone else was pretty much gone by the time I opened the hammock tarp. I ate breakfast and headed out to enjoy the multiple vista views in today’s hike and the slow decline in to Waynesboro, VA. I have to add that state qualifier at the end because the trail actually goes through another Waynesboro in Pennsylvania a few hundred miles from here. Here’s a panorama of one of the amazing views from today:

This Waynesboro is a pretty big hiker town. You may not think so as first though. When you first exit the trail at Rockfish Gap, you are greeted with a dilapidated truck stop, where only a popcorn food truck remains. The remnants of a gas station and fast food joint haunt the background of the turn off, and look like they haven’t seen business in 20+ years, but the popcorn truck is good. Cold drinks and hot food while you hitchhike or wait for an arranged ride.

The city has dozens of Trail Angels willing to drive hikers to and fro for free, so I called one up and he graciously dropped me off at Stanimals 328 Hostel. For such a big town, it’s odd that this is the only listed hostel in town, but thankfully it’s a nice one. There is also a church which will pull hikers up for any donation, but it is not open until May. And rumor has it, this is their last year offering that service. Lastly, some hikers choose to camp for free in town (which is permitted), then use the complimentary YMCA bathroom and shower facilities nearby.

When I arrived at Stanimals, I was pleased to see more than one familiar face. Spice was here, which I expected as we discussed it last night. But a hiker I haven’t seen since Day 1 was also here … Poncho Villa. Readers of this blog may not recall him, but I do! On my first day on the trail with Gandalf and The Captain, we met Poncho Villa and gave him his name. It was the first trail name I gave out, and I tracked his progress in shelter registries for weeks afterwards. I expected him to be in Pennsylvania by now, given his early speed, but he took on a bad ankle injury a couple weeks ago and has taken it very slow since (10 mile days). I think he was embarrassed, as his registry entries disappeared around the same time. It was a nice homecoming to see him again though, so I snapped the photo below.

After getting situated in the bunk room, I went to collect the resupply box I mailed here. But … it was nowhere to be found. As Stanimal checked his mail room, he asked me if I sent it to this hostel or his other one in Glasgow. A ghostly look of dread swept over my face as I checked the tracking number online. Yep, I sent it to the other location. D’oh!

Stanimal said he couldn’t make the drive down there tonight, but would bounce it forward to me later on the trail. Fortunately, USPS will let you do that for free, so I asked him to send it to my family in DC so I get it in Harper’s Ferry. Then I did my resupply in town at the Dollar General instead.

After shopping, Spice and I went further in to town for some dinner at Five Guys. It hit the spot, and just as we were readying to leave, I noticed a movie theater down the street. A big one too, with lots of new films out that were on my to-see list. So I walked over and caught a showing of “A Quiet Place”, a movie that I’ve been dying to see. The reviews of this film were spot on, excellent thriller / horror movie that is exceptionally well made.

The movie got out late, but I had already coordinated a ride back to Stanimals from a Trail Angel named “Yellow Truck”, who was waiting outside for me. I tell you, the people that help hikers like this are the nicest you’ll ever meet. They rarely want money (he didn’t), and genuinely want to assist you in your quest to complete a thruhike (he did). We are a very fortunate community to have aid like this throughout our 2190 mile walk.

Back at Stanimals, everyone was still up and about. It’s not too crowded here, maybe a half dozen people, but it feels like a full house all the same. Someone was watching TV, another doing dishes, 2 more shmoozing in the dining room … you get the idea. But pretty soon, everyone departed for bed, so I did the same.

Tomorrow I enter Shenandoah National Park, and the weather looks great for days!