Day 133. Full disclosure, I finished and scheduled last night’s blog before I actually got back to the hostel. There was no cell service there, so I assumed I’d go right to bed after my outdoor shower. Not the case!

We had an awesome campfire until after 10pm, and it was fantastic! After my fun outdoor shower, a bonfire was lit by the guests. The owners of the hostel, Steve and Cathy, made popcorn for us, then brought out a guitar and asked if anyone played. I said I did and would be happy to play as long as people wanted, which ended up being late into the night. Besides me, there were 9 others congregating around the fire, and everyone joined in singing songs at one point or another. It was a perfect evening and one I’ll surely never forget. As I went to bed, Cathy joked that this hostel has always reminded her more of a rustic summer camp … being a camp guy myself for years, and still sitting at the fire, I told her I couldn’t agree more. 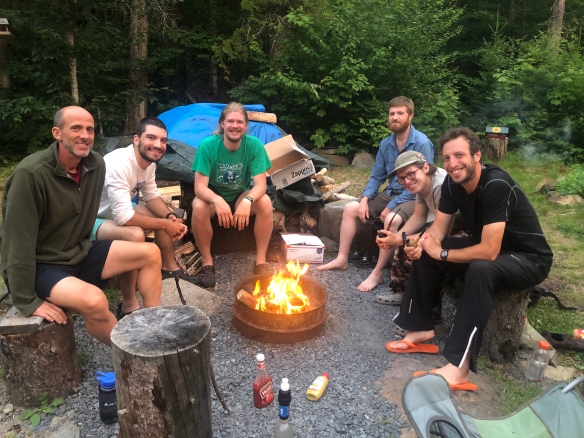 Side note, contrary to my confusion yesterday, Steve and Cathy do have a “home” on site. But it’s no more than a 1-room cabin next to the unattached 1-room kitchen. The whole property is just timyb1-room buildings and flower gardens . You can see their home in the pic below. From left to right is their bedroom, kitchen, hiker bunk house. 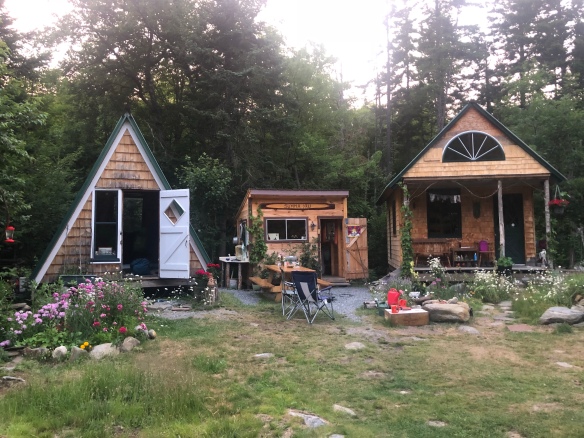 Then, guess what happened when I woke up this morning? I had the BEST day in Maine! It’s true, all the whining and complaining (mostly out loud to myself) the past week was all forgotten, as today brought a fantastic day of hiking again.

Beautiful trails, incredible summit views, a mile of gorgeous ridge walking in the sun, and even a waterfall. When I think back to this state of my journey, I know I’ll think fondly of today. Before lunch, I had scaled Saddleback Mountain, The Horn, and Junior Saddleback’s peaks … each providing breathtaking views in all directions. In fact, from the top of Saddleback, you could even make out Mt. Washington to the south and (supposedly) Katahdin to the North. I couldn’t see the latter, as it’s still 200 miles away … but they say it can be seen. 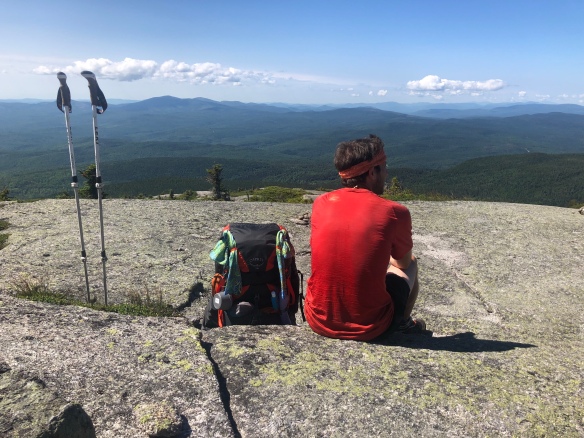 Some other fun anecdotes today. The Piazza Rock Lean-to privy had an interesting feature, so I learned. If you ever feel like pooping in the woods AND playing cribbage with a friend … this is the place for you! I’d love to meet anyone who actually attempted a game, haha. 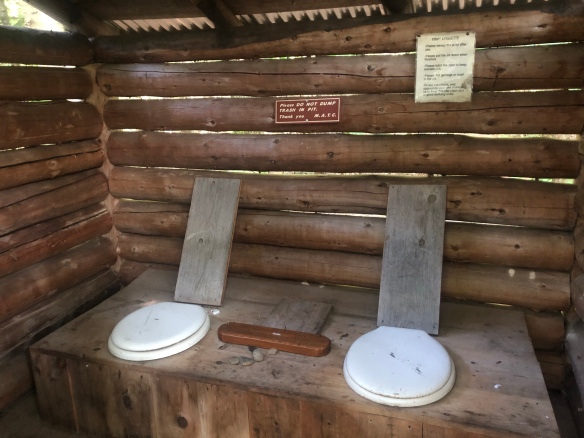 Also, found some blueberry bushes on the summits today. They were not ripe yet, but they are getting close. Maybe a few weeks away from good fruit. Another alpine berry was starting to bloom there also, which may have been crowberries, but I’m not sure. I have only seen those in Alaska, but they looked and tasted close to the same. Don’t worry, they weren’t anything poisonous. 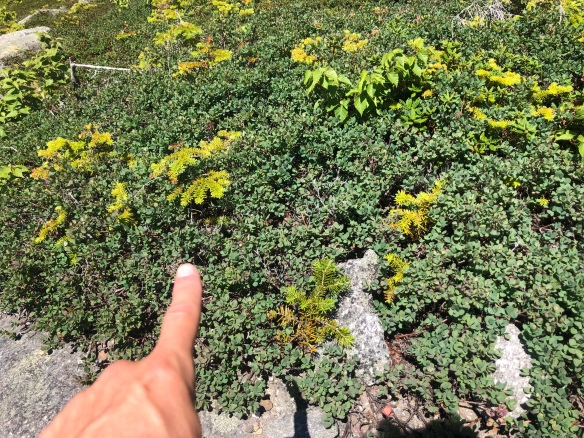 I also had a fun rest-stop at the Poplar Ridge Lean-to. This is one of the oldest shelters on the trail and is known for its informative binder of Q&As that accompany the registry. A volunteer built it up over his 50+ years of maintaining the trail in this area, and he had a good sense of humor. There are nearly 75 responses to hiker inquiries over the years, my favorite being #18 pictured below. Affirmative action mosquitos … brilliant.

Only a couple problem areas today. One was my 7th fall, which was totally my fault. I lost the trail (per usual) near the waterfall, and was using my Guthook app’s GPS to find it. But I was also walking, and I stepped on a loose rock, causing a rough stumble down the dirt hill. I scraped up my leg a bit, but nothing too serious. So, I yelled at myself (out loud of course), cleaned the leg as best I could in the stream, and hiked on.

The other annoyance today came at the end. When I arrived at the Spaulding Mountain Lean-to, another group of teenage girls were here. A different group than before, but still annoying as they took up all the camping areas in front of the lean-to. But that wasn’t the worst of it, I found a secluded place to string up my hammock about 50 yards behind the shelter and then went to get water. When I came back, a loud and obnoxious family of 3 had decided to setup their tent RIGHT NEXT TO ME.

I mean, come on. There were at least a dozen other tent sites between me and the shelter. Why go next to me?? And I’m not kidding, their tent is literally 3 feet from the end of my hammock. When I walked up, they jokingly said, “we hope you don’t mind, we couldn’t find another place.” I thought to myself, that I would be happy to find them one … most likely in the creek, where I wanted to throw their tent (with them inside) into.

I’m a nice, inviting, friendly and social guy … but this is seriously invading my personal space. They loudly ate their dinner on a log between our tents (no joke, 1 foot away from me) and then loudly “went to bed”. I write that in quotes because they proceeded to talk, giggle, bicker, and make loud movement noises on air mattresses for the next 2 hours. I can hear every word of their conversation, and every breath they exhale as I write this.

A really crummy way to end such a nice day. I was wrong to think that teenage girls would be the problem here. This married couple with their 25 year old daughter all sharing a small 3 person tent, close enough for me to pee on them, are. Hmm, maybe I should do that. A little late night revenge pee? It’s better than my other dark homicidal thoughts right now…