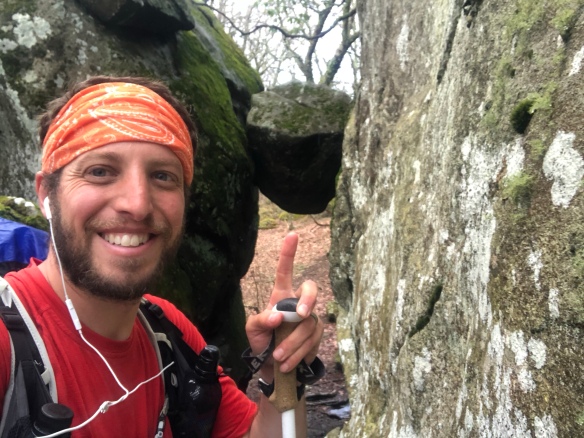 Day 56. As expected, it rained all morning. But, as hoped, it stopped in the early afternoon. I rolled into Cornelius Creek Shelter at the 18 mile mark around 4:30pm, and at that exact moment … the sun finally broke through the clouds. I took it as a sign to go on, and hiked the last 5 miles uphill to Thunder Hill Shelter with plenty of daylight to spare.

There were some interesting sights today, though it was mostly the same as yesterday with fog and cloud cover everywhere. A few tough stream crossings too, but nothing as bad as the one I wrote about last night. I stayed pretty dry most of the day, all things considered.

All of us in the shelter slept in late, as the pitter-patter sound of rain on the tin roof was soothing, and the view if you poked your head out of your sleeping bag was not. I eventually rolled out of bed around 8am, had a quick and cold breakfast, then hit the trail. I told Happy Feet and Tarzan of my tentative 24-mile plan, thinking maybe they’d be up for the challenge too … but they were less optimistic. It’s after 8pm now, so I’m guessing they stayed back at Cornelius Creek. Oh well, they will catch me again after the weekend I’m sure. It was fun catching up, so I hope to have the chance to hike with them again.

Around midday, I stopped for lunch at the most extravagantly built shelter I’ve seen to date. It didn’t have running water like the Fontana Hilton, or a shower and pizza delivery like Partnership … but it was built for kings. It looked brand new, feature by a double decker platform with an L-shaped porch, built in benches, ladders, and more. And the whole structure covered by a gigantic roof. It could probably hold 20 people comfortably, with 10 more squeezed in if needed. And the river is only 10 feet away for fresh water. The only thing missing was a gas grill. 🙂 I really wanted to stay there, but I had more sunlight and miles to go today, so I sadly moved on. Here’s a bad photo to try and capture it, next week’s video will have a full walkthrough.

There were 3 high climbs today, but I didn’t mind them that much. The ascents were not too steep (maybe 1500 feet over 4 miles), and the forest got steadily greener as I went. By the end, when the sun poked out, I was darn near skipping for joy. Blue skies and green forests? This is the trail I’ve been waiting for!

Of course it didn’t last long, as the sun quickly got covered up again and a light drizzle followed me for my last 2 miles of the day. It was right around this time, about a mile from my Thunder Hill Shelter destination, that I crossed under a prominent landmark of the Appalachian Trail. It’s nothing special, but has a great name and scary look: The Guillotine.

The Guillotine is a 15 foot rock tunnel you walk through, where a giant boulder lies tightly wedged between too other giant slabs of stone. You walk right under this monstrous rock, realizing at any point, it could probably come crashing down and flatten any poor soul unfortunate enough to be standing beneath. So I did what any normal, mature, 36 year old man would do … I ran like hell to the other side. Hey, I’ll admit the chances were slim of it falling, but it still COULD happen. The main photo above doesn’t do it justice, but you can see the geologic marvel in action.

I made good distance today, so I’m only 36 miles from my destination on Friday. I spoke to my sister and it sounds like she and the family will meet me at the US Route 60 road crossing in the late afternoon. If I stay at shelters, I’ve got 2 options:

I’ll need to chat with them one more time to get an idea on their ETA before I decide. But if I get there early, they arrive late, and I’m forced to take a mid-afternoon nap in the sun … I could live with that too.