Day 81. For every bad day there are 50 good ones. And today was definitely one of the good ones. For as low as my spirits were last night, there were uplifted immediately upon waking this morning and sustained those lovable levels throughout the day. In other words, I’m feeling much better and the usual excited Hello Neiman/Sharkbait AT hiker is back!

Today was everything I sulked that yesterday wasn’t. And it started with the most cherished of surprises … Trail Magic! I awoke at 6am to the sound of someone setting up a kitchen inside the pavilion, offering up hot coffee, banana pancakes and fresh fruit. This particular magician is a special one, as he spends the whole season traveling up the trail with the hiker bubble, providing hot food and good company to all. His name is Fresh Ground, and this is his 4th year providing this service he calls the Leap Frog Cafe. He started in Georgia like many of us, then continued to drive up and down the trail, stopping to feed hikers every couple days as he goes. I had never seen him nor heard of him until today, but was very glad I finally did get the chance. And on a morning I needed it most. 🙂

After that amazing breakfast, the sun poked it’s head out to greet us as well. See? Complain enough and the weather cuts you a break. And not just for a peek either, that beautiful golden orb burned all the rain clouds away and stayed out ALL DAY LONG. Needless to say, I was ecstatic and eager to go enjoy a great day of hiking now. I got a ride from another good samaritan back to the Eckville Shelter where I ended yesterday, and although it was a late start, I had a feeling I’d get in plenty of miles and rewarding views still.

The hike today started out with a steep climb, then miles of that same beautifully wide dirt road path. It somehow was even mostly rid of water, even though the onslaught of flooding was barely 12 hours old. It was so nice to be able to enjoy that trail, and I took an appropriate picture in gratitude of Mother Nature’s gift today (above).

Side note, between my lost weight and the haircut/shave Frank gave me yesterday … I barely recognize myself in my photos. I look 15 years younger, at least. I haven’t weighed myself since Harpers Ferry, but I bet I’m down over 20 pounds now. I like it though, and have to figure out how to maintain this boyish figure when my hike is done.

Halfway through the day, I stopped at a roadside restaurant for a snack called the Blue Mountain Summit. It was less than 100 feet from the trail at a road crossing and was a nice unexpected treat. A half dozen other hikers were there too (the ones who Zeroed at Eckville Shelter yesterday). As they were all very friendly, I mentally forgave them for their part in yesterday’s misery. After some amazing “Yuengs and Wings” (google it), I headed back out.

Then the fun started! Next up were some of the treacherous rock scrambles that give Rocksylvania it’s reputation. However, they were no problem when dry, and I actually enjoyed maneuvering around the ridge line of boulders with a full belly of renewed energy. The more memorable areas had names to strike fear in your heart, as any formidable foe would: Balance Rocks, Bear Rocks, Bake Oven Knob, and The Knife’s Edge.

The latter was exceptionally wild, as the Knife’s Edge referred to a steep and razor thin ridge of gigantic stone slabs that barely had enough space between for a clean footing. But you didn’t need that because you were meant to hike along the very top, where one slip on either side would send you toppling over the edge. And if that happened, more unfortunately angled slabs would slice you apart as you painfully fell down 20 feet or more. As usual, it’s tough to truly explain this experience in words nor a picture, but look at the photos below and just know it could have easily ended my hike for good. 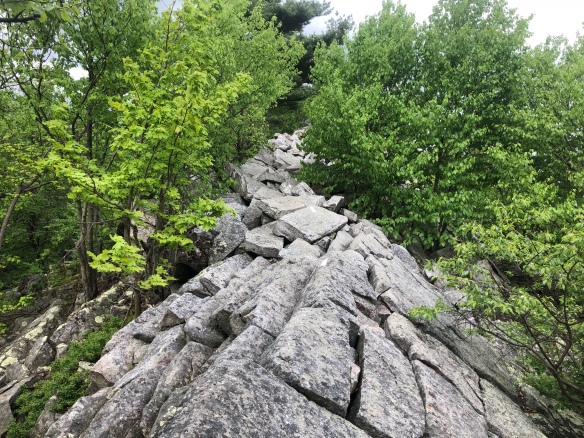 After all that fun, I eventually made it to the Bake Oven Knob Shelter and set up my hammock for the night. I haven slept in it for over a week, and am happy to be swaying in its orange embrace this evening. This also marked the first time in a week that I ended my day feeling good both physically and mentally, with an eagerness to hike again the next day … it was a welcomed feeling.