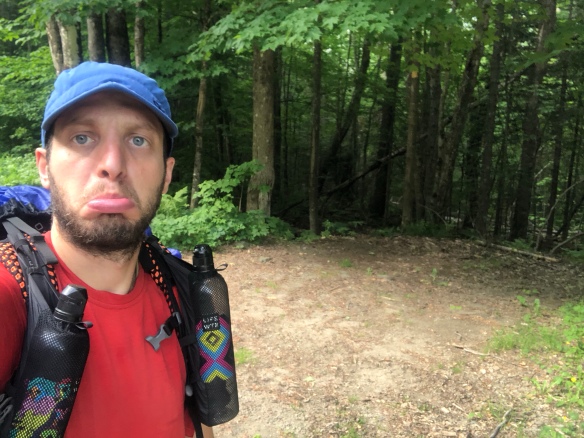 Day 110. Well, I didn’t wake up at 4:30, but the other fellows in the shelter did, so I was awake by 5am and cooking breakfast by 5:30. In the end, it was for the best, as it was another hot and humid morning and the storm on the horizon was definitely going to hit at some point today. I just hoped it would be after I reached tonight’s hostel.

Leaving Hexacuba Shelter, it was another couple miles up to the summit of Mt. Cube, which had some great views backwards to Smarts Mountain from yesterday. You could just stop barely make out the fire tower on the horizon, which was a nice reminder of how far I’d gone in just half a day. At the top was a nice rock scramble (that would be pretty tough when wet), then a casual descent through the woods.

Even though it hadn’t rained yet, the humidity was so high that some of the rocks were still slippery from moisture. I climbed down slowly, with a couple slips too close for comfort. One section at the top was really impressive though, as it had a 2 foot wide strip of white quartzite running through the middle of the boulder face. And coincidentally, it led you in the right direction for the trail. Whether Trail maintainers designed it this way or not, I laughed to myself … because at 30 feet long, it is the single largest white blaze on the AT! See the photo below.

After coming down from Mt. Cube, my excitement started to perk up. I mentioned to my shelter-mates this morning, that a very famous Trail Angel might be waiting for us at the base of Mt. Cube. Along a dirt path called Cape Moonshine Road, is historically where “The Omelette Man” awaits hungry hikers all summer. A native from Glencliff, he is said to be there every M-F from 8-5 with a large setup of drinks, snacks, chairs, and (you guessed it) omelettes. Ready to order egg breakfast was the only thing on my mind by the time I reached the dirt road at 9am.

But, alas, I was an unlucky Sharkbait. As you can see in my photo above … no Omelette Man. Just a whole heck of mosquitos eager to prey on me while I ate my boring trail mix instead. Reading this, you may think, “awe, he didn’t get eggs but had a nice snack anyways, that’s good.” But let me tell you, those good ole’ raisins and peanuts were eaten in bitter cold spite, solely to fuel me onward. Every handful was looked at with painful sorrow, and every swallow was done with reluctant force. It was a sad snack. And it was even worse 8 hours later when I learned from others that he DID show up, but not until around noon. He apparently has limited omelette hours during non-peak hiker days??

Once my pity party was over, the last 8 miles of the day were fairly flat and manageable. This now being my 2nd day in a row doing sub-20 miles, I was feeling pretty good and reached the Route 25 crossing to Glencliff before 1pm. There isn’t much to this “town”, except for a really nice hostel: The Hikers Welcome Hostel.

This hostel is a very popular place, owned by a hiker named Packrat and managed daily for him by former hikers. This year, the caretakers are Brooklyn and Bisquick, two thruhikers from the class of 2017. When I arrived, they showed me around the facility, which is pretty impressive for a hostel. The main house has a common room with chairs, tables, TV, movies, kitchenette, and tons of food. Mostly for sale, but also plenty of freebies. And the free stuff is just dropped off by random locals wanting to support hikers. A big box of smoked chicken and ribs was brought in yesterday, 2 boxes of hostess apple turnovers a day before, and today I witnessed a random gentlemen walk in and drop big bags of chips and cupcakes on the table for the taking. I’m not big on freeloading out here, but this is everything a hiker needs to have a nice affordable evening off.

Then out back is a shower house and bathroom. It’s sort of a rudimentary setup, with short walls and just a canvas top. In three connecting stalls, you have everything that requires water: shower, laundry, and toilet. As you can see below, it’s nothing fancy, but they all work well and the shower was hot so I had nothing to complain about.

Lastly, the bunkhouse is a brand new and very large barn built next to the main house. The old bunkhouse is in the main house hut only holds about 8 people tightly. This spacious building, though does not have electricity, houses closer to 20 people in new and comfortable beds. Not just a wooden plank to sleep on, but an actual soft bed. As hostels go, this is pretty darn luxurious.

Around 5pm, they shuttle everyone in to the one convenience store in town for dinner and/or resupply. It’s basically a 7-11 but with a small deli in the back. I picked up a sub for dinner, a few random items and a turkey sandwich for tomorrow’s lunch. It’s only 25 miles to Franconia Notch, which I should be able to do in 2 days, so I thankfully don’t need to carry much food.

The only concern, really, is what lies directly ahead of me … Mt. Moosilauke. At nearly 5,000 feet, it is the tallest mountain since Virginia and it is a BEAST. The climb up is nearly 6 miles of steep and rocky terrain, and the climb down is near suicidal. You descent is twice as fast and thus twice as steep. Many people will wisely do this mountain in reverse, getting a slackpack to the other side and hike back here. That way, you can avoid going down the steeper side. But I haven’t decided. It is costly to stay here 2 nights and pay for 2 shuttles. And truthfully, I have the time this week to go very slowly. Even if I only do that 8 mile mountain tomorrow, I will still be on schedule for my wedding break. 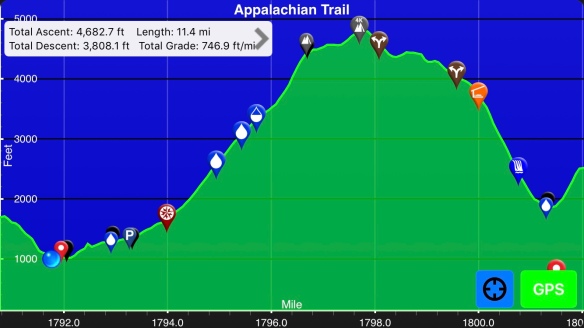 Pretty steep, right? Right. I’m leaning towards just going over it normally, but I’ll wait and see what the weather looks like tomorrow, and how my feet feel when I wake up. Oh, speaking of weather. I did beat the rain today, but it hit HARD around 4pm. We even had a tornado siren go off and a crazy heavy rainfall for about an hour. This is by far the worst storm I’ve been in out here, and am very lucky/happy to be indoors for it. I hope everyone else out there is safe, I can’t imagine what it must have been like for anyone hiking over Moosilauke today. Yikes.