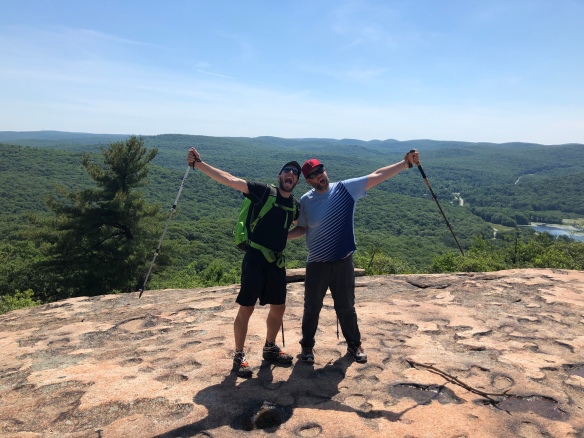 Day 113. After driving all afternoon, I arrived in New Jersey late last night. The whole time I was driving (which admittedly felt very odd to do again), I could only laugh at how quickly I was reversing the distance it took me a month to achieve. Travel 30 days by foot or 6 hours by car … this thruhike experience certainly puts things in perspective.

Over a few much enjoyed brews with my friends, we discussed the options for tomorrow and decided on a day hike in New York, to make up 12 of the miles I skipped in May. It was going to be a long day hike, but would end at Bear Mountain State Park and it’s beautiful Inn and lake. If you recall, this was where Happy and I started our hike together just a few short weeks ago.

The hike was spectacular, and Mikey was step and step with me the whole way. By the end, we were both exhausted and dehydrated, but feeling great. This section of the trail had 3 big mountains to climb up and down, but it was a very well groomed trail (especially the final peak). We scaled Black Mountain, West Mountain, and finally the very popular dayhike destination of Bear Mountain in about 6 and a half hours.

Each summit showed spectacular views of NY, and we even saw a great profile of the Manhattan skyline from Black Mountain since the day was so clear. It’s hard to make it out in the photo, but check out below in the distance.

Early on, we stopped at the William Brien Memorial Shelter briefly and talked with a thruhiker about his trip. I casually reminded him that today is the Summer Solstice (the longest day of the year), and that it is tradition for thruhikers to hike naked today. It’s a very odd Appalachian Trail tradition, but it’s a very odd trail with very odd hikers upon it. He was unaware (and uninterested), but at least now he know’s what to expect if he sees others in the nude! To be clear, Mikey and I were fully clothed. I decided I am a dayhike today and therefore had an excuse not to do it … which just sounds uncomfortable to me anyways, haha. I saw some funny photos on FB from hiker friends, but we were spared seeing any birthday suits on our hike.

At the final summit of Bear Mountain, we were greeted with plenty of other dayhikers, a beautiful tower structure, and great views looking out over the Hudson River. More importantly though, there were cold drink vending machines. It was HOT all day and we quickly drank the water we had earlier in the day, never passing a creek to refill. After 3 bottles of water, Powerade, iced tea, etc. each … we eventually felt good enough to make the 2 mile climb back down. The trail up to and down Bear Mountain is basically paved with stairs, so it’s easier (in theory). But hard surfaces and especially stairs are very tough on the knees, which were really killing me today. By the end of our hike, I was eager to be done and get off my feet. Great hike, but even on a “day off”, I can’t help but put stress my body. Oh well, I now have a few zero days of rest, so I’ll have plenty of time to fully recover.

I wished Mikey and his wifey goodbye, took them out to dinner as a thank you for their gracious hospitality, and jumped back in the car to finish my southward drive. I stopped at a motel outside Philly around midnight and will rest up before picking Dana up at the airport tomorrow. And come to think of it, Jurassic World just came out … so I may just find myself relaxing in the movie theater with popcorn first.

As for the thruhike, that will pick up again on Monday. For the section I missed, All that remains now is to hike from Delaware Water Gap to this Seven Lakes Drive intersection we started from today. In total, I have 97.1 of the 109.3 miles missed now to still make up. I plan to try and knock some out on Sunday or Monday, but we’ll see. I may not post much for a couple days, but want to get the video up from last week at least.