Day 123. Let’s start with last night. That impending storm in yesterday’s forecast? It came in full force around 3am. The crack of thunder was so loud that it shook the ground and woke me from slumber. I’m fairly certain lightning struck within 100 yards of the hut, and I was awake for the day after that boom. The storm continued to crash and below until 4:30, and I actually had a nice time watching it from inside the security of the dry hut.

I slept on the floor in the dining room, which wasn’t bad at all except for the mice. Actually, I’m convinced it was one mouse. One persistent, hungry, devilish rodent who now owes me a new sleeping pad. At some point in the night, this tiny bastard decided to nibble on my sleep setup and put a hole in my air mattress! Around the same time the thunder woke me, I realized I was lying on a now deflated pad very uncomfortably (thus the ease of my waking). I know it was him because as I sat watching the storm and cursing what could have caused my strife, he came back multiple times for more. I shooed him away time and again, but he kept coming back. So … sorry PITA … I stabbed him with my hiking pole, golf swung him into the wall, and brushed him out the back door. He wasn’t dead, but he was wounded and limped away to his evil mousy lair. While there, I yelled that he better think long and hard about the sins he committed during the night while he is in recovery … or if come back to finish the job. Match point, Sharkbait.

The weather took a while to clear up, but it eventually did and made for an amazing day of presidential summits and views. I left Mizpah Falls at 6:30 and entered a very wet, foggy and extremely windy climb upward. The first peak I got to was Mt. Eisenhower, which I chose to skip the blue blaze up to. Given the weather, I didn’t see the point of adding more rocky ups and downs to see nothing. The next peak was Mt. Monroe and that one I did go up. Not because I chose to, but because the actual AT section was closed and hikers were forced up and over the summit instead.

A few miles later, I strolled into Lakes of the Clouds Hut. This is the largest hut maintained by the AMC, and it sits just below Mt. Washington. Almost 100 people can stay there a night, and it is massive in size. But I didn’t know that until I almost ran right into it. The cloud cover was still so thick, I had no idea it was in front of me until it was 20 feet from me. I took the photo below a second later and then headed inside.

The Hut works the same as the others, just on a larger scale. A few other hikers came in behind me and we all took a break together, enjoying the Hut’s cold pancakes and coffee leftover from breakfast for $1 each. A nice $2 second breakfast. During this time, I met Much Obliged, a section hiker who stayed at Zealand Falls with my sister the night before. He and I decided to hike together for the day and headed back into the clouds and wind towards Mt. Washington.

Side note, before leaving, I walked around back to sneak a peak at “The Dungeon”. This is a storm shelter in the basement of the hut which hikers can sleep in for $10. I’ve read about others sleeping there before, but always with horrible reviews. Now I know why. When I opened the giant cast iron door, I was greeted with a damp, foul smelling cellar about 8 feet square. Two wooden bunk beds were crammed in the corner that appeared to be at least 50 years old, and barely able to support there own weight. It was dreadful. If this were the Middle Ages, it would make The Rack look like a friendly massage table. There is not enough money in the world to pay me to spend 10 minutes in there with the door closed, let alone sleep overnight! That room should be the subject of Stephen King’s next novel.

As we hiked up Mt. Washington, it began to slowly warm up, with brief spotting of the sun for seconds at a time. It didn’t clear by the time we reached the top, but you could tell it was on the horizon. The summit of Washington was a bit surreal though, as a thruhiker. There is both a road and railroad (“the cog”) track that carries visitors to the summit, which has a gift shop, cafeteria, weather radar, and an old hotel called The Tip-Top Room. This was just for show, as it’s a relic from a time long passed, but it is preserved well for visitors to peruse.

I waited in line behind a swath of tourists that all took vehicles up in order to capture the same photo next to the summit sign that I wanted. I don’t blame them for how they enjoyed this landmark, but I felt very out of place, as if I was the one that did not belong. I climbed thousands of feet up to photograph my reward … and being there with hundreds of tourists just didn’t give it the same feeling of accomplishment.

But a hiker never turns down a chance for hot gold, so I grabbed a $3 hot dog at the cafeteria, then headed back down the other side of the highest peak in the White Mountains.

And that’s when the clouds finally broke. Over the next few hours, it slowly cleared to beautiful blue skies and sunny weather. It was fantastic! The picture now painted in front of us reminded me of the scenery in the movie A Princess Bride. Much Obliged had a laugh at that, as he remarked the trail usually reminds him of the Fire Swamp. 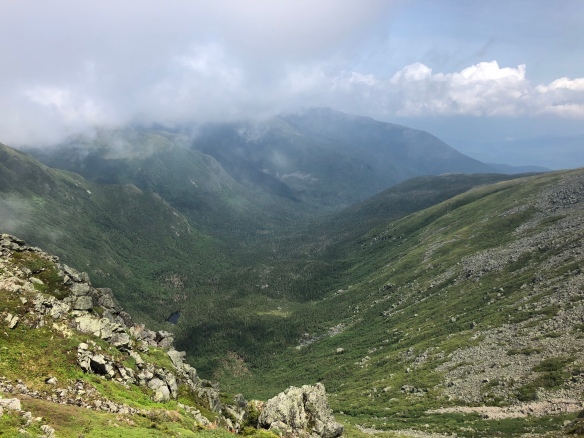 I could see the whole range by noon and it was breathtaking. In front of me lay Mt. Jefferson and Mt. Adams, the 3rd and 2nd highest mountains of the Presidential Range. As mentioned yesterday, the AT technically hikes around these summits, but you can blue blaze up them and back down to meet the trail again on the other side. To celebrate my good mood from the change in scenery, I decided to hike both summits. Although neither were too impressive at the top, being mostly too rocky and buggy to appreciate, the views were still worth it. I snapped some photos at each (below). 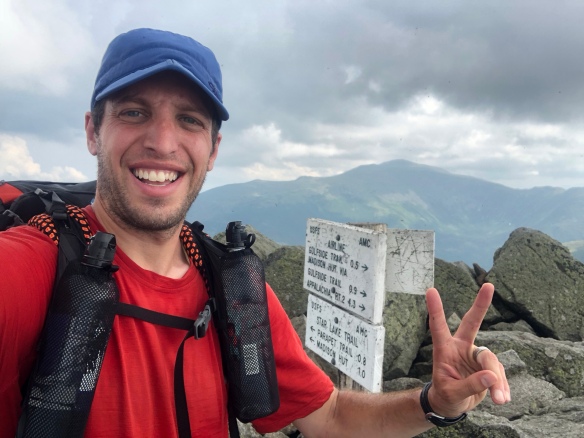 When Much Obliged and I arrived at Madison Spring Hut (just on the other side of Mt. Adams), it was only 4:30pm. Perfect timing to ask for Work For Stay. We both got a spot, then hung out with guests and other hikers who came in to join our WFS group later. For some reason, the croo was in an especially good mood and granted WFS to 5 of us. This hut only holds 40 people, so I was shocked but pleased at the kindness. I’ve never heard of that many WFS hikers at once. Two others came in late, asking as well, but they were politely turned away. Generosity can only go so far.

We swapped stories outside while the guests ate dinner, and I learned that the other hikers have been following me since Georgia. They started just a few days after me and hoped to catch up with the guy leaving small, custom “Hello My Name is” stickers in the registry books. It’s always fun when you catch someone whose name you’ve seen in the books for months, so we had a nice night all getting to know each other. I met Irish, Beach Bum, Michigan, Snapper, Sticks, and Perfect English, who all knew of me already. That was neat.

I did dishes again tonight for my chore, while others had to clean the oven, organize the spice rack, stir the compost pile, or clean the dining room. The hut got a lot of work out of us, but eventually we all finished and watched an incredible sunset together over the ridge (above). Then, when they shut off the lights at 9:30, we setup beds in corners of the dining room and immediately passed out. Although my sleeping pad still has a hole in it, I learned my lesson and am sleeping on top of a bench tonight. Hard and uncomfortable, but free from R.O.U.S.’es.