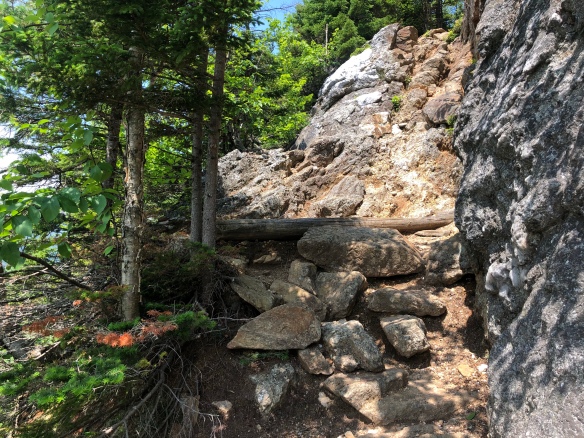 Day 124. For the first time since March 1st, I’m sleeping alone in the woods. I don’t subscribe to this practice normally, as I believe there is safety in numbers in case something goes wrong, but it couldn’t be helped today. In truth, it’s actually quite calming … when I don’t hear large noises outside my hammock tarp. I’m not worried about bears, if that’s what you’re thinking. In general, I believe I practice pretty good bear safety in the woods and don’t fear a possible encounter. I hang my food away from my tent, I rinse off any strong body odor before bed, I make lots of noise, etc.

No, the threats out here that scare me the most are animals or trees running into my hammock. A big dumb moose could trample me without even realizing it. And a widow maker (a dead tree that falls on your tent) is even scarier. Looking around the trail as I walk, it seems trees are falling over every day. A strong wind, to a poorly rooted dead tree, pushed in the right direction, is what concerns me. I’ll be sleeping with one eye (and ear) open tonight, just in case.

I’m stealth camping because I couldn’t get a work for stay at Carter Notch Hut. It was a grueling long day of hiking, and I got there st 4:30pm, only a half hour after they start accepting hiker requests … but no dice. Two southbounders had beat me to it and I was turned away. I spent most of the day hiking with the people I met last night (Michigan, Snapper, Irish, and Beach Bum), but they either stopped at Pinkham Notch or planned to go further than me, so I thought I could secure a spot easily. Oh well. This is the smallest and most remote hut, so I was not too thrilled about squeezing into a sleep spot with a lot of other people anyway. But the dinner menu looked good. Mmmm, pizza…

So I moved on and by 6:30 I had to stop, as I was simply too tired to go any further. After today’s hike, I was exhausted and hiking the full 7 miles to the next shelter was not happening. So, I strung up my bed at the first nice place I found, a spot near the very slow moving creek at Zeta Pass just below Carter Dome. It’s not great, but it at least has water, and I need lots of water tonight.

Today’s hike was great, but again extremely difficult. After leaving Madison Spring Hut around 6:30 this morning, I immediately climbed up my last Presidential summit: Madison. He was a tough bastard, with a 600 foot climb over half a mile and all huge rock boulders (what else is new). But the real struggle was getting down. It’s straight down 3000 feet to the base over just 3 miles. Of course on the same rough rocks for most of it, but since you finally pass below tree line again, also adding narrow winding corridors though the trees. That 3.5 mile stretch from the hut to the base took me 3 hours. Painfully slow, quite literally.

At the base of Madison it was another 4 to Pinkham Notch, but this was relatively flat and nice terrain. I did this section quickly, stopping only to read the dozens of signposts directing me where to go in this maze of hiking trails. At the end was the other big AMC hotel, the Pinkham Notch Visitor’s Center and Joe Dodge Lodge. It was nice, but not nearly as nice as the Highland Center. They have a much bigger outfitter and a quick order deli, but everything is pretty expensive. In the basement is a “hiker packroom”, which is a big open area with tables where dirty, smelly hikers can relax and dry gear away from the other guests. It also has dehumidifier fans blowing, in case you need to dry off gear, which is nice. But I didn’t feel like being a 2nd class citizen, so ate my pre-packed lunch in the large dining room instead. No one seemed to care.

I skipped visiting the detached Lodge, as it was well past noon and I had a very difficult climb ahead of me. Coming out of Pinkham is the ruthlessly unforgiving Wildcat Mountains. The Wildcat peaks are a series of rough climbs without rest, which forces you up 2000 feet in 2 miles to a ski gondola at the top. Then, as your reward for getting there, you are immediately given another 400 foot rocky climb to the Wildcat Summit. And by the way, by this point in the day, I was back within the clouds and saw nothing. Just moisture-laden rocks and steps to somehow climb up. I was later told by Michigan that this climb is the steepest on the whole trail. Not sure if that’s true, but it sure felt like it today.

This is when I finally reached the last AMC Hut, nestled steeply in between and down from Wildcat Mountain and Carter Dome. No work for stay, darn. Oh well, as Happy would say, “Could be worse, could be raining.” I met up with Michigan and Snapper again who were outside the hut and we all climbed up begrudgingly to seek stealth spots beyond Carter Dome. There actually was a really cool place at the top of Carter, whose summit is a rare flat and rock-less clearing. But the trees here were too small and weak to hang from. So I went down the other side to Zeta Pass and called it a day. On the bright side, today’s extra 3 miles will make tomorrow’s hike to Gorham shorter. I am meeting 3 friends there from back home that are coming to hike southern Maine with me, and don’t want to arrive too late in the day.